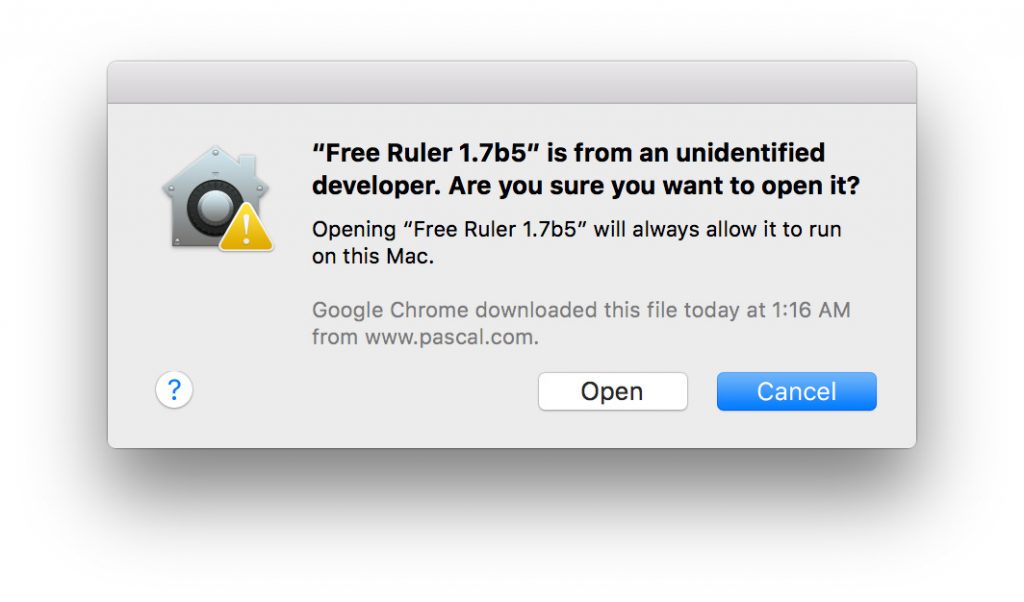 Apple has introduced a number of features designed to protect users from malware in OS X, but these tools occasionally go too far when trying to save people from themselves.

TL;DR:If you have an app from an unidentified developer and you’re sure the app is safe, you can force it to run by right clicking (or command-clicking) the app and choosing “Open” from the context menu.

Gatekeeper distinguishes between the latter two based, broadly, on whether the app has been signed with a legitimate Apple-issued signing key.

By default, Gatekeeper is configured to allow apps from the Mac App Store and from registered developers. Users can make this more or less strict:

Unless you choose to allow apps downloaded from anywhere, OS X will warn you against opening apps that aren’t signed: you’ll see a dialog box that says ” can’t be opened because it is from an unidentified developer,” and clicking OK will simply close the dialog.

If you’re sure the app is safe, you don’t need to alter your security preferences to open it — there’s a faster workaround.

Right click (or command-click) on the app and select “Open” from the context menu. This will present a slightly different dialog box: this time, you’ll be presented with an “Open” button that will let you force OS X to run the app.

Remember: only do this if you’re sure the app is from a reputable developer and has not been tampered with.

This website uses cookies to improve your experience while you navigate through the website. Out of these, the cookies that are categorized as necessary are stored on your browser as they are essential for the working of basic functionalities of the website. We also use third-party cookies that help us analyze and understand how you use this website. These cookies will be stored in your browser only with your consent. You also have the option to opt-out of these cookies. But opting out of some of these cookies may affect your browsing experience.
Necessary Always Enabled
Necessary cookies are absolutely essential for the website to function properly. This category only includes cookies that ensures basic functionalities and security features of the website. These cookies do not store any personal information.
Non-necessary
Any cookies that may not be particularly necessary for the website to function and is used specifically to collect user personal data via analytics, ads, other embedded contents are termed as non-necessary cookies. It is mandatory to procure user consent prior to running these cookies on your website.
SAVE & ACCEPT

Just Complete These Final Details to Set-up Your Demo​